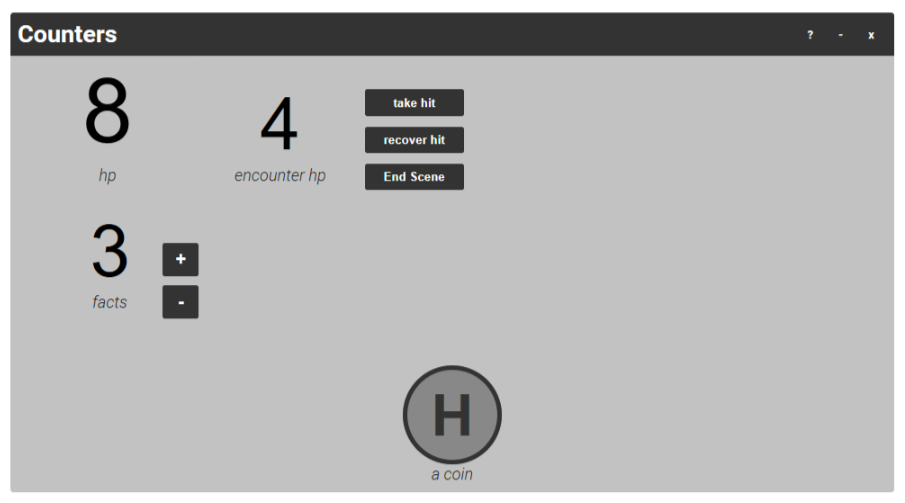 Counters is a jumble of things.

A Familiar concept. However, a new implementation. Your HP are divided into “Encounter Hp” and “Hp”. Damage is first delt to your Encounter HP. When you run out of Encounter HP, it rolls over to your HP. At the end of a scene, (whenever the DM decides that is), players click “End Scene” and recover their Encounter HP.

Damage is dealt and recovered in “Hits”. A hit is a random real number between 0 and 2. At the start of a campaign, it is best for the DM to draw up a chart outlining several example events and how many hits they deal. For example: punch:1, being on fire: 1, broken wine bottle :2, katana: 5 and so on.  This will be used as reference to help determine how many hits are dealt when a player is damaged.

A fact provides an avenue for a player to add to the world or story. A player can spend a fact point and say something like: “Fact! In this kingdom, everyone always wears a hat, which communicate social status” or “Fact! the baron is standing on a trap door”.  If no one vetos the fact, it becomes true. Any player can veto a fact by spending a fact point or the DM can veto a fact at no cost.  You do not get your fact point back if your fact is vetoed.

Each player gets 3 “Fact Points” per session. They do not roll over to the next session.

…because sometimes life calls for flipping.

Impact on the game

Dividing HP up into Encounter  HP and HP allows players to be a little bit reckless, but serious amounts of damage still have long term impact.