A more than year long, fifty three session roleplaying campaign; comes to a dramatic end. Sic is a ghost. Baxter is a zombie demon. Oyster is legitimately threatening, and Ban grumpily describes Magbriggan as a human farm for demons.

Sic Cofactum further expounds on the power of The Documare. Ban explores demonic innards. Baxter comes to grips with his predicament. Oyster confronts a former neighbor responsible for vanishing his house.

Baxter literally strong-arming his way to survival. Sic explores the mysterious and gruesome Cistern of Psuche. Oyster’s mustache begins to hum before his party. Ban and the ghost boys find themselves in a moonless desert.

The Alderman’s whereabouts are still unknown. Ban meets Moxiliar Sey. Oyster figures out the truth behind the light. Baxter continues his out of body experience.

A real life flashback, followed by another  scene from Ban’s not-so-pleasant childhood.  Baxter slides further into his predicament.  Sic attempts his inaugural flight around Magbriggan.

Sic is a free market guy.  Oyster Python forges ahead looking for any sort of authority to fix his house’s situation.   Then we close on another spooky flashback with Banerthal and Oyster,unfortunately Ban’s voice is still out during this episode. 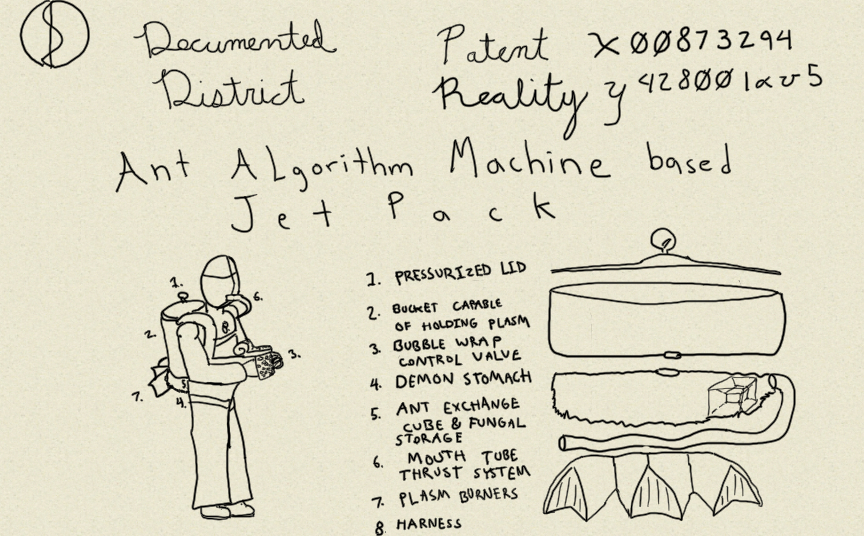 Sic attempts to figure what he is going to eat during eternity.  Ban has a flashback of meeting Elmer Flipp.  Baxter confronts Dr. Leemps at the hospital.  Oyster pays a visit to his quadrants’ municipal water office.

Baxter Crixus must escape the fighting pit with one broken arm and no motor control over the other.  Oyster Python feels invincible because he is  waxing and inebriated.

Nemo succumbs to his sinister thoughts, which may be bad news for Sic.  Ban continues grooming the first of his ghost mob.  Oyster spectates one of Baxter’s toughest and most visually stunning fights yet.

The ghost of Banerthal Sey hunts for knowledge and more humours.  Oyster gives Baxter pewter lamps for plasmic rituals, in exchange for fight tickets.  Sic is not alone as he wheels himself through the underground tunnels.

A voiceless Ban[1] gets back to doing what he does best! Sic Cofactum is well below the city, in what is known as, the Canyon Lands.

[1] Editor’s note: Our dear friend Colin was unable to speak during this and many upcoming episodes.  He is better-ish now, so fear not; his golden voice of reason will eventually return, but he is still recovering.

Oyster reconciles with Baxter for leaving him immediately after the bizarre trial.  Oyster absolves some of his debt with Baxter by interrupting  a plasmic ritual being conducted by his downstairs neighbors.

On the verge of death, Baxter consults with telepathic tadpoles.  Under duress, Sic shares real locations on a fake list.

Baxter meets a curious boy in white robes by small fountain.  Sic and Isabella are forced to leave the tunnels, finding themselves in a strange mansion and Wind safe house.

Sic bravely enters the underground hatch.  Ban goes from having his back against the wall to dangling over a metaphorical cliff edge.

Ban gets into beef with a tough woman wearing a straw hat and shepherding a herd of pigs.  Baxter carts himself way from court.  Subterranean Sic finds cyrillic writing and faces a test as expedition leader.

Ban gets help from the documented district to save Baxter, but he also spies a person of interest in thecase of the  Humour Bath.  Sic Cofactum is leading an expedition beneath the city; he must beware: fall-dough corruption, feral pigs, and Demons.

Sic journeys beneath the city through the mysterious tunnel system.  Ban finds, and takes, another friend to the hospital.  Baxter makes use of his new found power.

Sic finds someone in his secret chamber.  Under duress, Baxter joins Ban and Oyster at the Place of Trials.

Ban attempts to deal with the Ox inside the Place of Trials.

Sic navigates his way back to the documented district.  Baxter squares off against the notorious Elizabeth.

Ban gets called as a witness in Zanzibar’s trial.

Oyster bumbles his way through the tedium of Demon trial procedure, but manages to keep himself alive and out of contempt of court, for the moment.

Oyster wheels and deals his way through Demon court.

After the accidental arson, Ban is pursued back to the Documented District by men brandishing crowbars.  Baxter overhears a conversation about a Jade Horseshoe.

Baxter’s haunting troubles with Ela Tass have ended for the moment, but he must find a way extricate himself from the demon Abelard.  Ban and Sic run into Baxter outside of the Embassy, in a warehouse near the lumber mill.

On the same night as Amadeus’s party, Ban and Sic go back to the Sawmill.  Oyster aspires for his troubles, both legal and lethal in nature, to balance each other out.

Ban and Sic take the very inebriated Oyster Python back to his apartment.

Amadeus’s parties are highly regarded, and easily the best in all of Magbriggan.  The invitations appear to be normal spectacles.

Members of the party are given new character moves for their Humour Advancements.

No Christmas cheer will be found in this episode.  The group prepares for another gladiatorial fight.  Ban studies  the Humour Bath, passes a well choreographed parade, and plans to dig up his brother’s body.  Baxter’s real fight is imminent, but first he wants to place a bet on himself.

Baxter and Oyster rendezvous with an arms dealer named Cody to acquire some lethal poison.

Oyster meddles with Demon records,  Ban strikes a deal with a secretive doctor.

Oyster attends a secret meeting with a wanted Demon, named Charles, where they discuss the Keeper of the Times.  Sic searches the fighting arena for his poisoner’s supplier.  Baxter places an enormous bet on himself, the underdog, and visits an eye doctor.

Sic studies nonhuman humours,  Ban plays with faldo, Baxter is haunted by his recent past.

Ban gets himself into a tough situation, while Baxter begins a new project.

Oyster becomes the first human to step foot in the Place of Trials, where he is being forced to legally represent Zanzibar.

Oyster makes an unannounced visit to the Documented District.

Baxter is trapped in a demon house and Ban finds something.

Sic is determined to find his poisoners.

Baxter and Sic take Ela Tass to the Documented District for medical attention.  Ban bluffs about a demonic pact with Manfred; a sort of “life insurance” involving a name in a box.

Baxter breaks from routine during his fight.

A bad day to be a chair.

Welcome to Magbriggan, city of demons! The curtains open as Baxter Crixus –an 18th century English nobleman imprisoned in Magbriggan after making a deal with a demon to win a duel — fights for his life in the demons “human fighting arena”. Among the crowd a pair of long lost twins cheer for opposing sides. In Baxters corner is Sic Cofactum the well respected alderman of the documented district. Rooting against Baxter is Banerthal Say, an ill tempered humor smuggler who wants nothing more than to escape the city.